BUCHAREST, Romania AND SAINT LOUIS, Mo., May 17, 2022 /PRNewswire/ -- The first leg of the 2022 Grand Chess Tour (GCT) has concluded with Grandmaster Maxime Vachier-LaGrave taking the first place crown of the Superbet Chess Classic Romania. The tournament included all nine full tour players and one local wildcard player, Romanian Grandmaster Bogdan-Daniel Deac, all of whom competed over nine rounds for the $350,000 total prize fund. 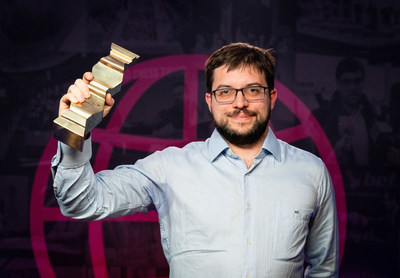 Initially it seemed that one of the tournament's co-leaders GM Wesley So or GM Levon Aronian would take the first place prize of the Superbet Chess Classic Romania but GM Maxime Vachier-Lagrave won his last round game; catching up with the two co-leaders and ultimately defeating both in an exciting round-robin playoff. The French grandmaster was declared the winner of the event, earning 10 GCT points and pocketing over $77,000 in prize money.

"All in all, this was an excellent day for me in winning three games in a row," said GM Maxime Vachier-Lagrave. "I knew that GM Firouza would not back down from a fight on the last day and while we both tried very hard to win at some point it backfired for my fellow Frenchman and in the end, I won a very hard fought game.  I would like to thank the organizers for putting on this amazing tournament and especially thank my family, friends, and fans for their support throughout this entire event."

"The last nine days have provided thrilling matchups and nonstop action to chess fans watching live here in Bucharest and through our broadcast worldwide," said GCT Executive Director Michael Khodarkovsky. "We look forward to continuing this excitement for the next leg of the tour, the Superbet Rapid & Blitz Poland. The Grand Chess Tour continues to showcase chess as it's meant to be with the largest prize funds offered globally, the best players from around the world, and a world-class commentary team that our fans have come to know and love."

In conjunction with the GCT, Chief Tour Arbiter IA David Sedgwick and Deputy Tour Arbiter IA Chris Bird have confirmed the event arbiters. IA Tomasz     Delega shall serve as Event Chief Arbiter, and he will be assisted by IA Agnieszka Brustman as Event Deputy Arbiter.

There has been a change to the field for the Superbet Rapid & Blitz Poland, GM Constantin Lupulescu had to withdraw from the tournament and has been replaced by the current Romanian Champion, GM David Gavrilescu.

The Superbet Rapid & Blitz Poland is sponsored by the Superbet Foundation and organized by Superbet Poland and will feature10 players in a round robin format with a total of $175,000 in prize money.  The Superbet Rapid & Blitz Poland will be held in Warsaw, Poland at the Conference Center of Museum of the History of Polish Jews from May 18 - May 23, 2022 with a Private Opening Ceremony on May 18 at 2:00 p.m. (CET). The tournament rounds will begin at 2:00pm (CET) daily and are free and open to spectators on a walk-in basis.  The tournament broadcast will be available on grandchesstour.org.