BOZEMAN, Mont., April 18, 2017 /PRNewswire-USNewswire/ — U.S. Senator Steven Daines toured the new corporate headquarters of Universal Athletic Services on Monday. Senator Daines was also joined by Bozeman Mayor Carson Taylor and Bozeman Director of Economic Development Brit Fontenot for a press conference following the tour that was hosted by Universal Athletic Services and Montana & Idaho Community Development Corporation. The purchase and rehabilitation of the new facility was made possible through the use of the New Markets Tax Credit (NMTC) Program, a federal program operated by the CDFI Fund at the U.S. Treasury that provides critical financing  to rural and urban communities in Montana, and nationwide. In 2015, Montana & Idaho Community Development Corporation provided a NMTC allocation to fill a financing gap, allowing the athletic apparel company to proceed with its purchase of the former Van’s IGA grocery store on North 7th Avenue for its new headquarters. 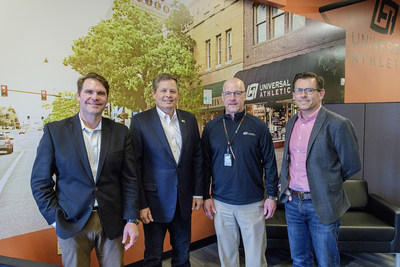 «Without financing through First Interstate Bank, Montana & Idaho Community Development Corporation and the New Markets Tax Credits Program, our new downtown headquarters would simply not have been possible,» said Larry Aasheim, co-founder of Universal Athletic Services. «This program enabled us to consolidate and remain in Bozeman’s urban core, rather than move to a lower cost location outside of downtown, allowing us to create and maintain over 70 jobs in this community.»

Universal Athletic is one of three NMTC projects that Montana & Idaho CDC has financed in Bozeman since 2008 (alongside the Element Hotel and Town & Country Foods), resulting in almost $30 million in capital invested in the area.  Senator Daines’ visit comes at a time when the future of such programs are under review by the federal government.

The NMTC was enacted in 2000, a bipartisan effort to spur private investment and economic growth in low income urban neighborhoods and rural communities that lack access to the patient capital needed to support and grow businesses, create jobs, and sustain healthy local economies. The NMTC provides taxpayers with a 39 percent federal tax credit, taken over seven years, on investments made in economically distressed communities. However, the credit has relied on short-term, last minute extensions for most of its history, until it was recently provided a five-year extension of the NMTC in the PATH Act, passed in December 2015. Presently, there are bipartisan bills in the House and Senate to make the NMTC permanent and ensure this important financial tool remains available to rural communities and urban neighborhoods that have been left outside the economic mainstream.

«We’re thrilled to have provided New Markets Tax Credit financing to 26 projects across Montana and Idaho since we launched this program in 2008,» said Dave Glaser, President of Montana & Idaho CDC and member of the NMTC Coalition. «The City of Bozeman has been a great partner throughout this process, from articulating their vision for the city’s future, to identifying projects like Universal that bring together the right people, leverage the right resources, and ultimately, bring their economic development vision to life.»

«First Interstate Bank is proud to have partnered with Montana & Idaho Community Development Corporation to finance the new Universal Athletic Services headquarters in Bozeman,» said Bruce Parker from First Interstate Bank. «The New Markets Tax Credit Program is a valuable tool for projects like this that have a catalytic impact on communities across Montana.»

Since its implementation, the NMTC has leveraged some $80 billion in investments for hard-hit, blighted communities around the country, resulting in over 750,000 jobs. According to the U.S. Treasury, for every $1 in federal funds, NMTC projects generate $8 in private investment. Senator Daines notes this is important because projects are driven at the local level.

About New Markets Tax Credit Coalition
The NMTC Coalition is a national membership organization of Community Development Entities and investors organized to conduct research on and advocacy for the New Markets Tax Credit. The Coalition hosts two annual conferences and annually publishes the NMTC Progress Report. To learn more about the credit or read our recent NMTC reports, please visit www.nmtccoalition.org.

About Montana & Idaho Community Development Corporation
Montana Community Development Corporation provides consulting services and financing to entrepreneurs and small business owners across Montana and Idaho, as well as affordable housing solutions in Montana. Montana CDC was one of the first Community Development Financial Institutions in the country to be certified by the U.S. Treasury, and its powerful New Markets Tax Credit Program brought hundreds of millions of dollars to Montana and Idaho and created thousands of jobs. Since its start in 1986, the nonprofit has grown to over $400 million in loans under management, with offices in Missoula, Bozeman and Boise. Learn more at http://mtcdc.org/.

About Universal Athletic Services
Universal Athletic has been in the sporting goods industry since 1971 and is the #1 independent team dealer in the country. It operates in 12 U.S. states, including 10 retail locations. Universal’s mission is to equip every athlete to achieve peak performance.

To view the original version on PR Newswire, visit:http://www.prnewswire.com/news-releases/us-sen-steven-daines-sees-the-nmtc-at-work-during-tour-of-new-universal-athletic-headquarters-in-bozeman-300440992.html