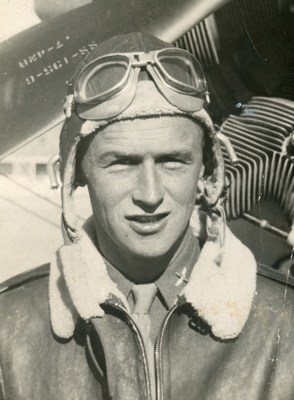 Just as U-Haul is celebrating 75 years of service this year, America will soon celebrate the 75th anniversary of V-J Day. This signifies Victory over Japan and is observed Sept. 2 when the signing of surrender occurred, effectively ending WWII.

Veterans such as Lewistown native Thomas W. «Tom» Safford returned home to start a new life after the war, and in doing so planted the seeds of prosperity for U-Haul, a product of the peace for which they fought.

WWII-era Navy veteran L.S. «Sam» Shoen and his wife, Anna Mary Carty Shoen, conceived U-Haul in June 1945 when they recognized a basic need while moving up the West Coast, having left behind most of their belongings since one-way trailer rentals did not yet exist. From that idea, an industry was created and a new level of mobility became attainable for every American family.

The Company’s 75th anniversary tributes will peak triumphantly with the Pearl Harbor Aviation Museum’s dedication of the renovated Ford Island Control Tower on Aug. 29. U-Haul Pacific Theater veterans’ bios and photos will be displayed in the tower lobby. Safford will be among those memorialized on the lobby wall.

The tower will showcase a new elevator, gifted by U-Haul CEO Joe Shoen, providing public access to the observation deck where America’s lone WWII aviation battlefield can be revered and our heroes remembered.

Ready to Serve
Safford was born in 1920 to Mr. and Mrs. G.M. Safford in Lewistown. From the time he was 10 years old, Safford worked as a farmhand, making a game out of trying to outwork fully grown farmhands. He graduated from Missoula County High school in 1938.

Safford enlisted in the Army Air Corps in June 1941. He served in the South Pacific as a bombsight mechanic. His unit was dispatched to Australia as part of the Allies’ unsuccessful 1941-42 campaign to defend the Dutch East Indies (present-day Indonesia) against Japanese occupation. Safford also supervised the conversion of «The Swoose» B-17D Flying Fortress bomber. Its first combat mission of the war was a high-speed transport plane for Lt. Gen. George Brett, commander of the Allied Air Forces in the Southwest Pacific. Safford was awarded the American Defense Services Medal and the Asiatic-Pacific Medal (one Battle Star).

In October 1945, Safford was discharged. He attended and graduated from Montana State University with a fine arts degree. He did his graduate work at Washington State College. During the ensuing years, he studied engineering, math and statistics at Oregon State, UCLA, Penn State and Texas Tech, garnering the equivalent of a Masters of Engineering degree with more than 230 hours of college credit.

U-Haul Tenure
Safford joined U-Haul in 1952 to run the advertising department, which consisted of a desk, a chair and a Graflex Speed Graphic camera. Over the next 39 years, he served in many capacities, including assistant to the president, safety director, vice president, and director of product planning and development. His ingenuity and mechanical skills were legendary, spanning the full range of U-Haul equipment and operations.

There is a distinguished list of achievements attributed to Safford. He built the first U-Haul headquarters in Portland, Ore., by moving and converting a WWII Army barracks. He built and then opened the first U-Haul-owned and -operated moving center. He is also credited with redesigning the running «Sammy U» logo, named for the Company’s co-founder, in 1952.

Safford semi-retired in 1985 due to health reasons, and passed away in September 1991. He is survived by a granddaughter, Ember Shapiro, and two great granddaughters, Kaitlyn and Brittney Shapiro.

Veteran Ties and Appreciation
The Shoens started U-Haul upon Sam’s discharge with $4,000 of accumulated Navy pay and the courage formed by the cauldron of WWII. With the help of other veterans, the young couple forged their new enterprise from the freedom that victory produced.

Today, U-Haul serves all 50 states and 10 Canadian provinces, helping millions of families move every year. Safford is one of the many veterans who laid the foundation for the present prosperity U-Haul enjoys.

U-Haul is one of a myriad of companies built by these incredible veterans, who are to be saluted and remembered during this 75th anniversary celebration. Thank you, Tom.

Find more veteran tributes in the History and Culture section of myuhaulstory.com.

Since 1945, U-Haul has been the No. 1 choice of do-it-yourself movers, with a network of 22,000 locations across all 50 states and 10 Canadian provinces. U-Haul Truck Share 24/7 offers secure access to U-Haul trucks every hour of every day through the customer dispatch option on their smartphones and our proprietary Live Verify technology. Our customers’ patronage has enabled the U-Haul fleet to grow to approximately 167,000 trucks, 120,000 trailers and 43,000 towing devices. U-Haul offers nearly 697,000 rooms and 60.7 million square feet of self-storage space at owned and managed facilities throughout North America. U-Haul is the largest installer of permanent trailer hitches in the automotive aftermarket industry, and is the largest retailer of propane in the U.S. For information on moving safely and smartly with U-Haul during the COVID-19 pandemic, please reference https://www.multivu.com/players/English/8601451-u-haul-moving-season-covid-19-safety/.